noise in the basement: 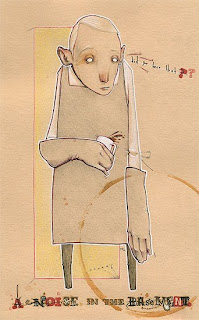 the line-up has been confirmed and it should be a good show. spread the word! 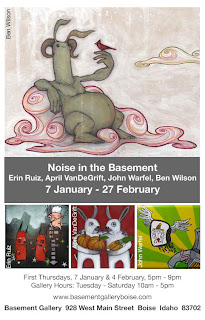 Posted by stereo at 6:56 PM No comments:

Email ThisBlogThis!Share to TwitterShare to FacebookShare to Pinterest
Labels: basement gallery, noise in the basement 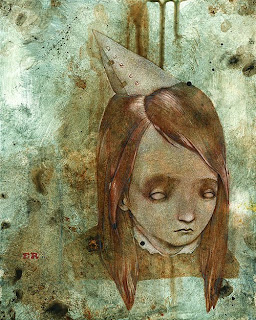 i'm babysitting The Roomies two black beasts tonight. London, the older lab, is so fraught with anxiety at the disappearance of her beloved Roommate 2 that she keeps passing gas. i'm drowning the annoyance with beer and cookies.
i'm still working past the deadline for the next Basement Gallery show. i hope to get a lot more done with the next few days.
i'll leave you with a piece from the upcoming show along with some seasonal tunes. there are few christmas songs i can actually stomach after all these years, but these are two:
judy garland - have yourself a merry little christmas
is there anything more depressing than this song and this first version? it's off the movie "meet me in st. louis" which is a family fave. taken in context with the storyline, it's no wonder this song is laced with heartache.

sharon jones & the dap kings - ain't no chimneys
i probably shouldn't, but i giggle at this one. well-executed, sharon. top lyrics.

and merry christmas, new year, hannuwhatevers to all of you.
Posted by stereo at 10:57 PM No comments:

Email ThisBlogThis!Share to TwitterShare to FacebookShare to Pinterest
Labels: basement gallery, holiday, noise in the basement

december 18th came and went like every other day. there was no tear shed, no fanfare of any sort. it briefly crossed my mind to call my mother that day, but by the time i had gotten off work, i had forgotten to. morning of the 19th, i couldn't decide whether to mention to her how i regretted not calling or to just forgo mentioning the date altogether.
i didn't say a thing.
i wondered instead, in the back of my mind, how she passed the anniversary of my grandmother's death. did she feel the same sadness of her absence itching under her skin? this year was different. this winter is different, i think.. i can see my grandmother's house from my back door.
looking out my window, i tried to grasp the feelings of that winter she passed, as i stared at her home-- the one i came to know well as a child, but have not stepped into in thirteen years.

what became of the energy of your body? i could feel you haunting me, slow, sure, and sweet.. beckoning with a strange curiosity toward your old home.
when i saw my estranged grandfather load into his pickup and drive away down the road, the spell was broken and i returned to my desk to continue working on art.
grief seems to me, to be a very solitary journey.

it's with this, i present a few more songs from my winter playlist:

jon brion is one of my two favorite contemporary composers. (the other being thomas newman) this song is from the movie "eternal sunshine of the spotless mind." when i really listened to this the other day, it nearly made me weep. i think, for the first time, i was able to grasp the meaning of it. i can distinctly recall a conversation with one of my roommates in which i told her, "you can't just erase your mind of it, no matter how you try." the song can seem misleadingly peppy, but i think you can hear the underlying sadness of a lost love you can't seem to erase if you just listen for it.

frank, AB by the rural alberta advantage.
from wiki:
"Frank, Alberta is a coal mining town in the Crowsnest Pass, Alberta. On April 29, 1903, at 4:10 a.m., 90 million tonnes (30 million cubic metres) of limestone crashed from the east face of Turtle Mountain and covered approximately three square kilometres of the valley floor. The slab of rock that broke free was approximately 650 m high, 900 m wide and 150 m thick[1]. The slide dammed the Crowsnest River and formed a small lake, covered 2km of the Canadian Pacific Railway, destroyed most of the coal mine's surface infrastructure, and buried seven houses on the outskirts of the sleeping town of Frank, as well as several rural buildings. Frank was home to approximately 600 people in 1903; it is estimated that 90 of the roughly 100 individuals in the path of the slide were killed."
i can't get past the quiet end of the song, a soft drumming mimicking what i imagine to be a subtle dying heartbeat. the lyrics could be interpreted as lovers dying together or my take: a strangely possessive Nature, trapping sleeping citizens and lovers to keep them forever in its lonely hold. it's so delicate, and hauntingly tragic.

last for now is Kettering by The Antlers. word on the inter-street is that "hospice" is a concept album. kettering seems to tell the story of a hospice worker falling for a patient dying of bone cancer. it breaks my heart, but it's so deliciously addictive.
Posted by stereo at 7:49 PM No comments:

the "Long Distance" show opens tomorrow at Lisk Gallery for First Thursday. i dropped off my work today with a mix of relief and worry-- worry, as usual, that it won't be a strong body of work and relief that i can move onto the next project. i'll be downtown for the show sometime between 5-9, so if you're out and about, do come say hello.
now, i have about 15 days to round up some art for the Basement Gallery's illustration show opening in january. so far, i've only heard of ben wilson and myself being on board for this one, though i'm sure there are some other players. i'll keep you posted when i find out the illustration roster.
Posted by stereo at 9:56 PM No comments: