i've been a big fan of The Sounds for some time. "no one sleeps when i'm awake" is from their album Crossing the Rubicon, released last summer. and it's good, especially if you're often awake at 3 a.m. and trolling for music to not sleep to. the vid itself is a semi-romantic view of the urban nighttime. my fascination with the magic of the night aside, i think one of the reasons i dig this band is that they're what Blondie would be today. and man, who doesn't love Debbie Harry?
this is one band i'm making a vow to see live. even if i have to fly to sweden, i'm gonna do it.
Posted by stereo at 12:57 AM 1 comment:

working for the weekend. 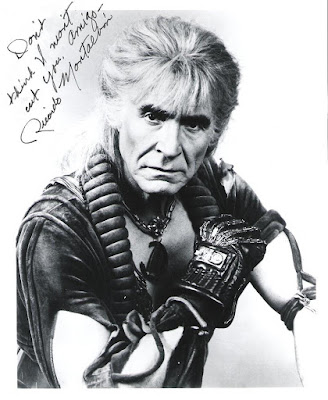 in yet another stunning "incident" involving the roommates' black canine beasts, i am sporting one chipped lateral incisor. first the broken backyard fence, now, my face. jumping up to meet my head unexpectedly, nearly knocking me over, London's teeth met my own in a powerful click. it took me a minute to notice as i rubbed at my teeth and stumbled to the bathroom mirror, bemoaning that their dogs were really too large to be jumping on someone of my size and stature.
when i discovered my loss, i shouted that their dog was gonna pay for me to get it fixed, to which Roommate 2 said that "it's really not that noticable," --(that's because it's not in your mouth)-- which i took to mean:
1. it's not worth fixing because, to her, it looked rather minor.
2. no one but me is going to pay for this.

when i saw my sister later, she immediately gawped at my dental hideousness and shrank away from my broken visage. we may or may not be acting over dramatic about this, regardless, puppy heads will roll. (my first eating experience since has thrown my mouth into upheaval in a confused struggle to deal with The Change, reminiscent of the time i was affixed with braces and had a near-death experience involving spaghetti noodles. it was all scratchy and jagged and this "minor" chip be damned- it shall be fixed if i have to pay for it in puppy blood.)

i'm immersed in the traffic box project for the DBA currently, so i haven't had any time to work on new art but there's an interesting article over on ISO50 on how creative types deal with the creative rut. it includes the advice of two of my favorite artists: Audrey Kawasaki & Deth P. Sun.
says deth:
"I don’t really get into ruts that often. When I do I just take a break from drawing and do whatever I feel like until I feel like drawing again. I try not getting into ruts by keeping my mind active with new interest or subjects, reading, watching DVDs, finding interesting podcasts. It’s also nice to hang out with friends who have other interests. I think the well of stuff I’m into is pretty low, so a lot of the things I draw about is stuff my friends talk about and the things they are interested in. Like I’m not drawn into Native Americanism, horror films, talking to the undead, or the magical healing powers of crystals, but I end up drawing that stuff cause my friends talk about it so much. But yeah, I don’t know. It's different for everyone, but this is the way I do it."

magical healing powers of crystals *mocks*.
humorous that the general consensus on avoiding The Place Where Creativity Goes To Die is to simply do something else. watch movies, drink beer, go for a run- though, not necessarily in that order.

it's early morning on a friday. thank you, weekend, for being ever so punctual. i'm including a bunch of songs you wouldn't think i liked. it's good weekend music. some're off my art-making playlist. some are off a playlist my roommates refer to as the "Pre Funk."
enjoy your weekend, kids.

Email ThisBlogThis!Share to TwitterShare to FacebookShare to Pinterest
Labels: art is hard, cut a bitch, roomies 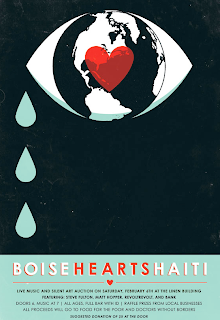 just a heads up, i've got two artworks in the BoiseHeartsHaiti shindig tomorrow. if you're looking to bid on some good art for a good cause, some of my favorite peeps also have art available: ben wilson, erin cunningham, and sue latta. be there! (magic word: please!) see full press release below for info, and full props to lauren and jesse for organizing this.

Proceeds benefit Food for the Poor, Doctors Without Borders

Local musicians and artists will come together to raise money for Haiti disaster relief during BOISEheartsHAITI at 6 p.m. Saturday, Jan. 6, at the Linen Building, 1402 W. Grove St. in Downtown Boise’s Linen District. Admission is a suggested donation of $5 at the door. All ages, full bar (ID required).

All proceeds from the event will benefit two charities working on Haiti’s biggest issues: food and clean water (Food for the Poor) and medical needs (Doctors Without Borders).

For more information on BOISEheartsHAITI, contact Jesse Larsen, 208.863.5326 or fabujes@yahoo.com, or LaurenTweedy, 208.340.2583 or laurentweedy@yahoo.com.
For more information on the Linen Building, contact David Hale at 208.385.0111 or info@thelinenbuilding.com. Visitthelinenbuilding.com and interact with the Linen Building on Twitter, Facebook and MySpace.
Posted by stereo at 8:40 PM No comments: