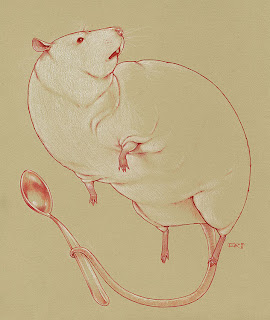 so as it turns out, three jobs is a lot to handle. i've been absent for a long while. i've tried the whole tumblr thing, you know, "keep up with the new." but it has never felt right to me. it lost the personal feel, the part where you get to convey with words (and not just reblogged images) how you're feeling.
i know. it's ironic, isn't it? that an "illustrator" would hesitate from blogging images to convey emotion. but there are times when tumblr does a decent job, and many where it falters. for me, it's a lot more of the latter. pulse of pop culture be damned!
i'm getting older, thankfully so are you. but it's a new year, yeah? so i'm reflecting as people tend to do.
last year, i worked hard on two solo shows, a few graphic design projects and some commissions. i've got some stuff in the wings to start off the new year and hopefully by the end of this month, i'll have some news about t-shirts and an updated website. i haven't been terribly present with emails and news so if i needed to embrace some sort of resolution, it would be to upkeep that aspect of art-making. i'm continually working toward that.
in other unrelated news, i've got that itch for the horizon again.. wondering how soon i can save some pennies for another vacation.
Posted by stereo at 1:24 AM No comments: