wrapping up my work for the "Long Distance" show tonight. i've got a lot of ideas for works for this show that i'm just not going to have time to get to before the opening thursday.
i imagine a lot of these ideas will spill over into the Basement Show.. last two peeks: 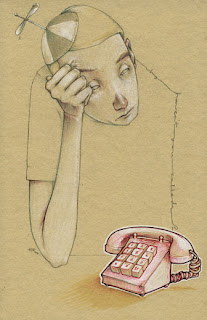 (the line "why haven't you called?" comes from loch lomond's "scabs on this year" posted in the last entry. being an illustrator, you can't help but be swayed by words often times more than the image it conjures.) 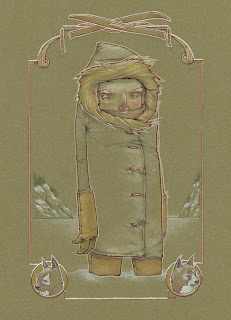 i'm adjusting to having two new roommates who, upon moving in, came with over 500 channels of DirectTV: the invention of the devil.
i haven't gotten much work done, to say the least. ten minutes ago, one of their gigantic black labs took a small break from chewing on a bone (the size of a human femur) to vomit sporadically all over the living room and kitchen. 20 lbs of unchewed dog food and a half-masticated, uncooked bratwurst lay all over the floor amongst the splatters of blood-- because, as if this couldn't be topped, the same dog is in heat. it looked like a serial killer explosion. i could only laugh as Roommate One whimpered and faux-cried while Roommate Two forced her to scoop up the steaming mess.
yay me.
(now they're "playing" board games. i just heard One yell and knock Two's playing pieces all over the floor while screaming she's a cheater. Two insists she didn't remember where her playing pieces were.)
this is a test of my art-making diligence, right?
... there are so many enticing tv shows beckoning...
eff you, tv. eff you. 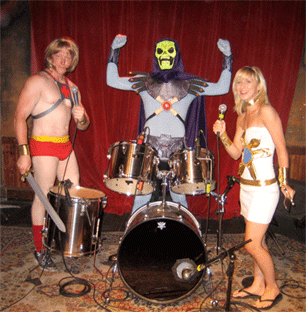 damn, working from home iz hard, yo.
Posted by stereo at 6:29 PM No comments:

Email ThisBlogThis!Share to TwitterShare to FacebookShare to Pinterest
Labels: art is hard, art stress, inventions of the devil, roomies

more work for the Long Distance show. i decided to try my hand at some more literal, less melancholic interpretations this weekend. this is what i came up with: 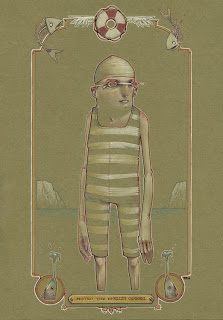 my framing influence is present in this one with the border work. i enjoy the embellishments.
back to work.
Posted by stereo at 5:59 PM No comments: 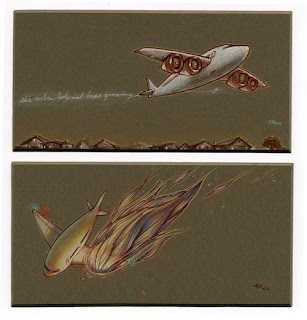 i should most definitely be working on some more art.. but then i get trapped on the internets like some little kid with ADD and a sugar-high. i was just trying to make a playlist on the ipod, i swear. four hours later..
it's getting colder, the pup's winter wardrobe has been pulled out, and i'm searching for my winter playlist.. something i can draw to.. so far, this is what i've found and am digging:
edward sharpe & the magnetic zeros. this gigantic band has a rockin' seventies influence, sounds a bit like a harder America to me.. mostly, i love the cute exchange between the two singers in the middle of the song "Home." maybe it's the way she says, all drawn-out, "alexaandeer.." or how he says "nearly broke your ass.." that makes me giggle to myself. i can't say for sure. also check out the more psychedelic "Desert Song." really more of a late summer/fall feel to them, though.
tv on the radio. the band that refuses to be pegged under any certain style or genre. i like "Love Dog" best. the pulsating, driven, laid-back shuffle of it gets me each time. this is definitely on my winter playlist.
i was a big fan of The Microphones, but haven't listened to them much since the name change to Mount Eerie. Mount Eerie just released an album in ode to the wind, if i remember correctly. it's a sweeping, dark album, reminiscent of the earlier album released under The Microphones "The Glow Pt. 2." these songs should be on someone's winter album, might as well be mine. check "Between Two Mysteries".
i discovered greg laswell when i heard his cover of kate bush's "this woman's work." his cover is worth checking out, as is his cover of kristin hersh's "Your Ghost." i can't think of many lyrical lines that leave more of an impression on me than "i think last night, you were driving circles around me."
(disclaimer: i'll leave these songs up for a week or so, then take them down. if you represent any of the artists mentioned, or are one of the artists mentioned and wish to have your music taken down, don't hesitate to email me and i will honor your request in a timely fashion.)
ETA: music links removed to make room for new, word.
Posted by stereo at 10:53 PM No comments: 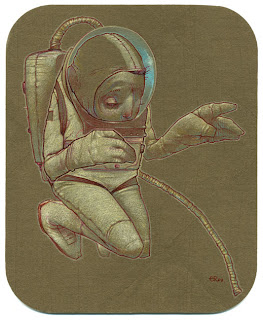 now busy working for next two shows. this is the first sneak peek at the batch for the show at Lisk Gallery for december. the theme is "Long Distance." it will feature mostly small works dealing with long distance (both literal and relationship-wise), homesickness, travelers, loneliness and general melancholy. perfect for the winter blues, yeah? the astronaut is a primary figure in a lot of my work. the idea exemplifies everything about long distance. i think we can all relate to his emotional plight.
after that, i'll have work for january at the Basement Gallery for its annual Illustration show.
back to work.
Posted by stereo at 9:53 PM No comments: 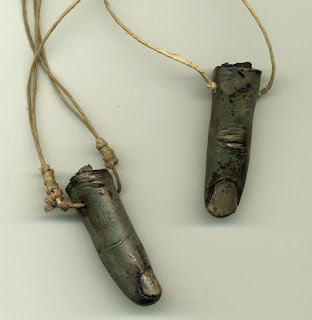 for the halloween party this year, i made a small batch of zombie fingers and strung them onto a hemp thread. the stubs glow in the dark as though infected and glowing with Solanum, the virus responsible for reanimation. the blood splatters are coated in a glaze to appear still wet. life-size and cast from my own fingers, i only have two left. i will offer one each, for free, to the first two people to show interest! email me at erin@erinruiz.com, or leave a comment on my blog and i'll get back to you.
game on!

ETA: all zombie fingers are accounted for. thanks to all for playing!
Posted by stereo at 1:30 PM 2 comments: