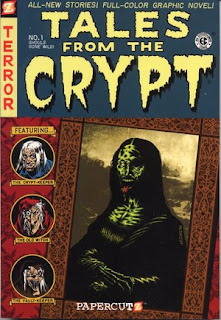 it's nearing the end of my favorite month and the house is all decked out with pumpkin guts, skulls, and candles. halloween is, in my opinion, the most interesting of holidays. i squeal with delight when i start seeing fake blood, plastic machetes and swords, orange lights and horror movies on sale in the stores. i, no doubt, disappointed my mother many a time because i never took as much an interest in some of the kinder holidays, more specifically her favorite: christmas.
she once asked me why i would never draw her a nice Victorian house. i told her, matter-of-factly, that the only way i was going to draw her a "nice Victorian house" was if it was being besieged by a horde of the living dead. she never brought it up again.
i was a big comic fan, and among my favorite was "tales from the crypt." whenever moms would take us to the Paperback Place to purchase secondhand romance novels, she allowed my sister and i to get one comic each. beth would pick up a "bugs bunny" or "the who cares bears" without fail. i'd chose a "tales from the crypt" or a spiderman. now, i only have one "tales from the crypt" comic left in my collection; its pages folded and cover worn. thumbing through it after rediscovering it after the move, i wondered two things:
one, how the hell did i convince my mother to buy me this fantastic piece of morbid horror? and two, where are the others??
if you had access to HBO cable back in the early nineties, you remember the tv show with the crypt keeper. though, i'm not sure how many of you will remember the "crypt keeper" released a few songs like "deck the halls with parts of charlie" or "the crypt jam"?
if you want to deck out your computer desktop with silver screen era monster awesomeness, go here.
(last year i created a batch of dismembered toes with toe tags as party favors for some of my favorite people. this year will be no different. for now, it will remain a secret, but i will be sure to post photos of this year's eerie creations soon.)
in other creative news, i just ran across these embroidered texts and thought it such a clever idea. 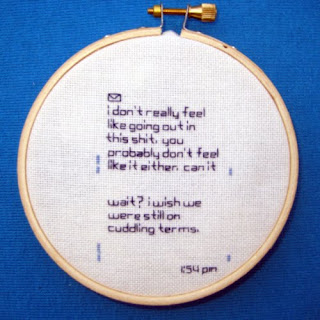 and where would you choose to wake up tomorrow?

Posted by stereo at 8:34 PM No comments:

for those of you who have noticed a problem with the store link off my website, milquetoastpress.com is no longer. this summer, we took on a business advisor and we are currently changing things up a bit. what this means: the new website is now under mqpclothing.com. most of our designs are being retired or redesigned to make room for new apparel. what you'll find at mqpclothing is a working site, and one that is subject to change as i work with our tech guy and tweak the site store to reflect our style. you can still purchase shirts directly through me- i believe the new site is still in progress at the moment- or we have some designs we printed up for the Slings & Arrows show at the Visual Arts Collective available. i don't run as much of the business as i used to. we have allotted different positions to others within the business to cover things that cut into my design time. what i no longer do? build and update the site, 50% of the printing, schedule meetings and boring business stuffs. what i do now besides have my hands in everything? oversee site building and design, 50% of printing, attend meetings, and all shirt design work. with my hands free of the technical and business side, i am able to concentrate on fashion trends, yay! and new ideas, as well as following them through from concept to shirt printed.

i'm currently working hard on some fresh designs for release very soon. we were hoping to get this up and running by october, but i've been far too busy to get everything up to speed on my end. i'll keep you updated as i change out old links and the new line is released. i might post some sneak peeks at the new designs before the launch. we'll see.
Posted by stereo at 12:39 AM No comments: